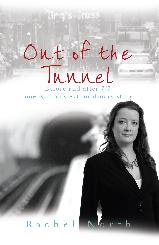 Last night I came in from the pub and picked up Rachel North's book 'Out of the Tunnel'. It had been sitting next to the bed for a couple of weeks while I read some other rubbish (see other posts below). In point of fact, I had been putting off reading it because the subject matter seemed so dark in prospect.

But once I started reading it I found it impossible to stop and carried on into the wee hours. This morning I woke up and finished it. It is a trip to hell and back.

On the Seventh of July 1995 Rachel North got on a tube train to work. In a sense she's been trying to get home ever since. Horrifically raped by a passing stranger some years prior, she'd decided to tell her story to a magazine. She was reading her account of the attack when a bomb went off just down the carriage. This book is about her experiences and her recovery. It's also about the emergence of a radically different person, her attitudes changed and in possession of talents she hadn't known she possessed.

Here is the bombing in all its horror. The sudden darkness, the heat and the smoke. The foul taste, the blood and the filth. Here too the heroism of the ordinary people who rise above the carnage in the tunnel and reach out to help and support one another. There's the raw courage of emergency workers - the policeman who ran into the tunnel not knowing what had happened, telling his younger colleague to 'seal the station and report him missing' if he did not return.

And here is the crass and exploitative nature of some of my colleagues in journalism, whose behaviour I would not have completely believed had Rachel not written about it.

In this book Rachel crosses the line from normal life, where we kid ourselves we're in control, into the other place where it is more than clear that we are not the master of our destinies at all.
Here, extraordinary events shape your life in dire and unlooked for ways. On this side of the line you are not in charge. Loss and injury occur, often in a random way. What had seemed concrete will be disturbingly fragile, and your peace of mind, which you'd previously assumed was secure, will suddenly be lost. You will be angry. You will mourn fiercely. In this place you may not sleep. Horrific and powerful memories return, unbidden and unwanted.

In this book Rachel describes life on the other side, and her return to the rest of us. It's a book about gumption and backbone - she's a strong willed individual whose passion for life cannot be snuffed out. She's a different woman at the end, just as loving, but politically articulate and struggling for other people's rights as passionately as she struggled for survival in the darkness. She fights too for an official inquiry into the events of that morning; with the change of administration and the ending of the British presence in Iraq, she may get it.

Out of the Tunnel is an important book for everyone in my business to read. We have to understand that our unpopularity is sometimes well earned. Everyone else, and particularly those of us in dark tunnels of our own, will be able to read it and take heart from it.
Posted by Hendo at 9:13 AM

Thank you Hendo for the review. It was only a few journalists who were awful, if I wrote a sequel I would put in how much I have been helped by other members of the same profession, many of whom I have been deeply impressed by.

I hope you are okay after reading it; it is a bit grim at times. But it has a happy ending, whjich you were there for! Yay!

Hendo
London, United Kingdom
Tired hack with a gadget habit, started this blog by accident when I pressed the wrong button on my mobile phone. The views expressed here are my own, nobody elses, and certainly in no way reflect the views of any of my employers, past or present.

Followers of The Hendo